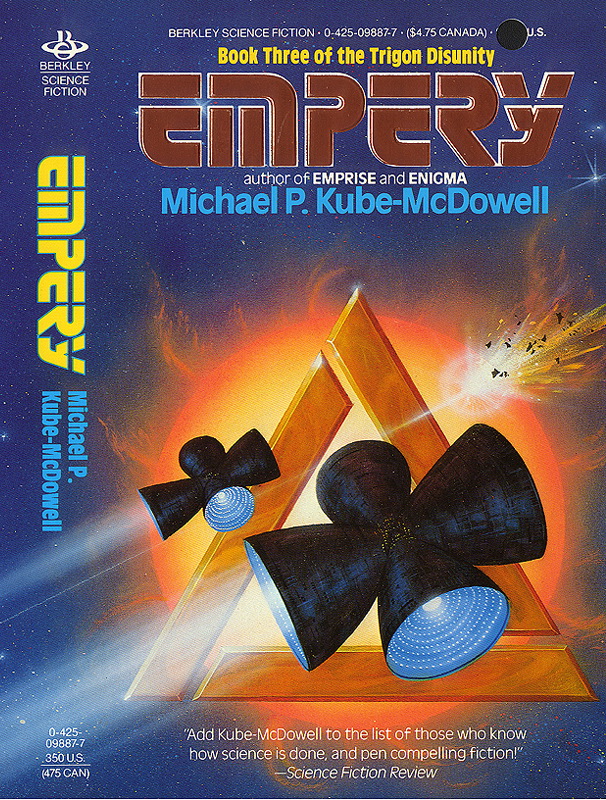 For Pat, John, Sue, and Pauline,
who have been not just family,
but supporters and friends.
And for Janie and Matt, just because.

REMARKS ON THE “TRIGON DISUNITY”

Shortly after the establishment of this office, and in connection with the declassification of most Unified Space Service records, I undertook to coordinate a comprehensive review of contemporary history — that is, the six centuries since the initial radio contact between Earth and Journa.

Previous histories had either emphasized local, parochial concerns or offered a narrow, phenomenolinear view of watershed events revolving around a short list of key figures. My interests, however, were in decision-making, rather than the decisions; in event-enabling, rather than the events.

As the project progressed, the most striking feature which emerged was the prevalence of trinary conflict, to wit:

It was in recognition of these trinary conflicts that I called our final report “A Terran Account of The Trigon Disunity.”

The report proved to be more influential than anyone involved with the project thought possible, spawning a ten-volume general abstract and, later, a three-volume popularization. Both carried “The Trigon Disunity” as part of their titles.

With the passage of time the term has come to be understood throughout the Unified Worlds as an appropriate label for the period itself, as “The Renaissance” and “The Golden Age” are applied to certain episodes in Terran history.

From an historian’s perspective, such telegraphic labels are always misleading and inappropriate. But this is especially true of “Trigon Disunity,” since it refers not to something that happened, but to how something happened.