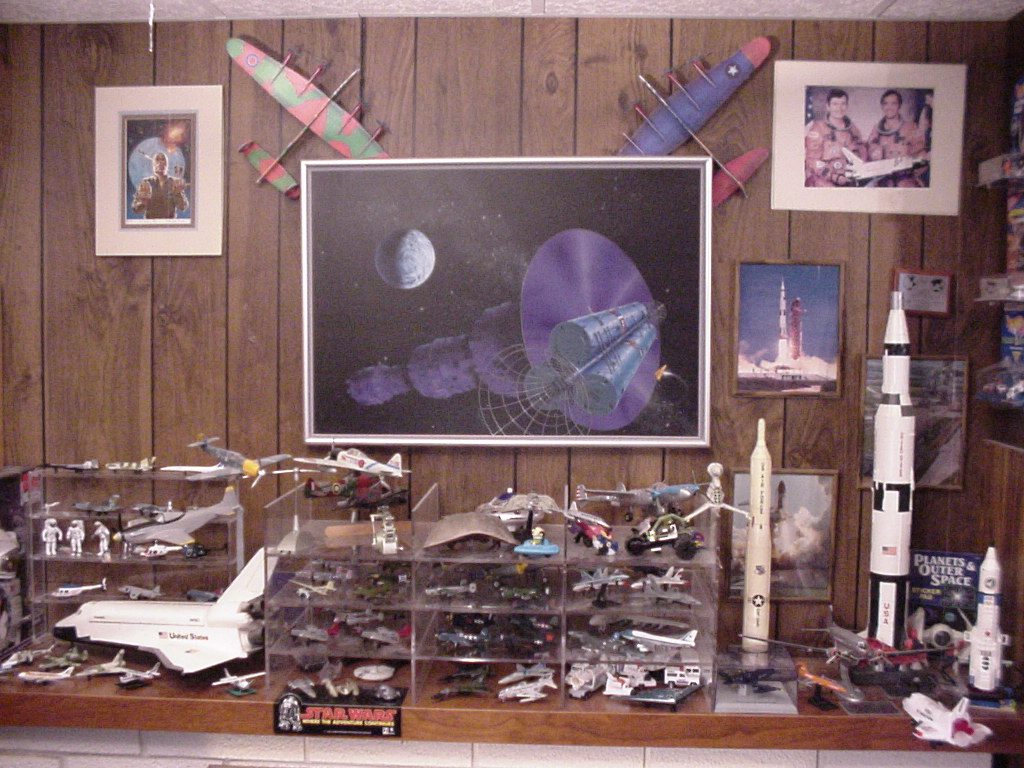 An Eclectic Collection of Aerospace Curios and Tchotchkes

I didn’t set out to create an aerospace shrine* in the middle of the west wall of my office. It just happened.

I got the fever when I was young–Chi Sequence all the way, put me on that starship to Tau Ceti. Looking back, I suppose I started my collection in the fifth grade, by writing to aircraft manufacturers asking for photos and factsheets on their aircraft. Douglas, Grumman, Lockheed and Boeing are among the companies which were kind enough to be generous to an earnest 11-year-old. I still have my scrapbook of the Gemini missions and a boxful of newspaper clippings from Apollo 1 through Apollo 17. And I’ve had thirty years to accumulate more.

The view above is of the larger part of the portion on display. The sharp-eyed will spot the original cover art by Ron Miller for Emprise (with a 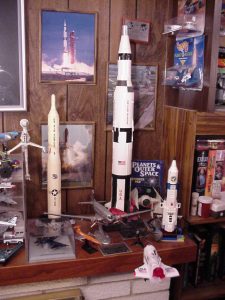 mysterious extra planet, apparently added to make the painting more saleable), a Monogram Apollo-Saturn model (missing its Apollo capsule, heat shield, and escape tower, which fell behind the shelf and haven’t been rescued yet), an autographed photo of the STS-1 crew (a gift from a NASA contact), David Mattingly’s original Asimov’s cover sketch for my story “Slac//,” foam gliders of a B-24 and B-17, a horseshoe crab (officially here as an alien), Cosmo Spacely, the Space Shuttle model I used when teaching, a TIE Interceptor and assorted Star Wars diecast vehicles, a motorized Japanese Zero, a NASA photo of the Apollo 11 liftoff, a copy of the commemorative plaque on the Eagle lunar lander, and a manufacturer’s desk model of the Titan I. Most of the smaller items on the Plexiglas organizer are die-cast metal aircraft (most by Maisto, Road Champs, Matchbox, Yatming, and Corgi), World War II era and later. 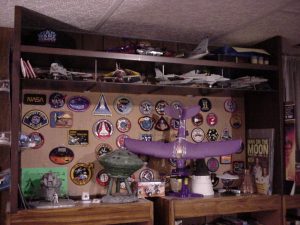 Elsewhere are my Estes rockets, a bulletin board full of NASA mission patches (plus a massive photo album with the balance of that collection), my press card and auto pass from the STS-4 launch, six “birding books” full of my warbird photos, a Mercury Capsule bank from the 1964 NY World’s Fair, a rusting piece of Cape Canaveral’s Pad 17 (from which the Gemini missions were launched), an even smaller piece of the launch pad where the Apollo 1 fire took place, G’Kar from Babylon 5, an unopened Mars Rover Hot Wheels set, a cube of Space Shuttle tile material, and a G.I. Joe Buzz Aldrin, to name just a few.

But I’m not done yet. I have my eye out for a die-cast B-36, and, boy, it would be great to find the missing aviation arcade cards from the collection I started in Ocean City in the early 1960s…

*It was my friend and fellow Black Book Band-mate Barry Childs-Helton who first dubbed my collection “the shrine.” Out of respect for his doctorate in folklore (with a special interest in space culture), I’ve thought of it that way ever since. Besides, “shrine” strikes me as more forward-looking than “museum,” and my feelings about flight and space exploration are very much about the possibilities created by applied human imagination.