I’m continuing to have problems updating this website, particularly with new media. So I can’t show you the cover of the just-released Arc Manor reissue of Empery, the third book of the Trigon Disunity. But for a limited time, the trilogy is featured at a special price at publisherspick.com, with Emprise the free e-book of the month. There’ll never be a better opportunity to replace your yellowed dead-tree Ace paperbacks with bright shiny new digital copies. (If you still prefer paper, Arc Manor also offers the trilogy as trade paperbacks.)

Stay safe out there.

I’ve never been very comfortable with the self-promotion side of a writing career, but it’s harder to find that head space right now than at any previous time I can remember. Pandemic gotcha down? Say, can I interest you in some skiffy escapism. Unemployment at 25%? Perfect time to go shopping! Streets rocking with protesters demanding justice?  Wait, before you go out, look over here–we have ebooks and cookies!

Eh–no. Not going there. So how about I pin a simple unvarnished announcement on the bulletin board for when we have the luxury of sparing some attention for it:

(I was going to include a cover photo, but WordPress is being cranky and won’t allow me to upload one. Will edit this when that issue is resolved.)

At your favorite bookseller.

I haven’t had the pleasure of opening a box of new books for a good while, so I thought I’d share it with you. 😁 EMPRISE is back in print at long last, in trade paper, Kindle, and epub ebook editions from Arc Manor! And there are five more backlist reissues coming in the months ahead. 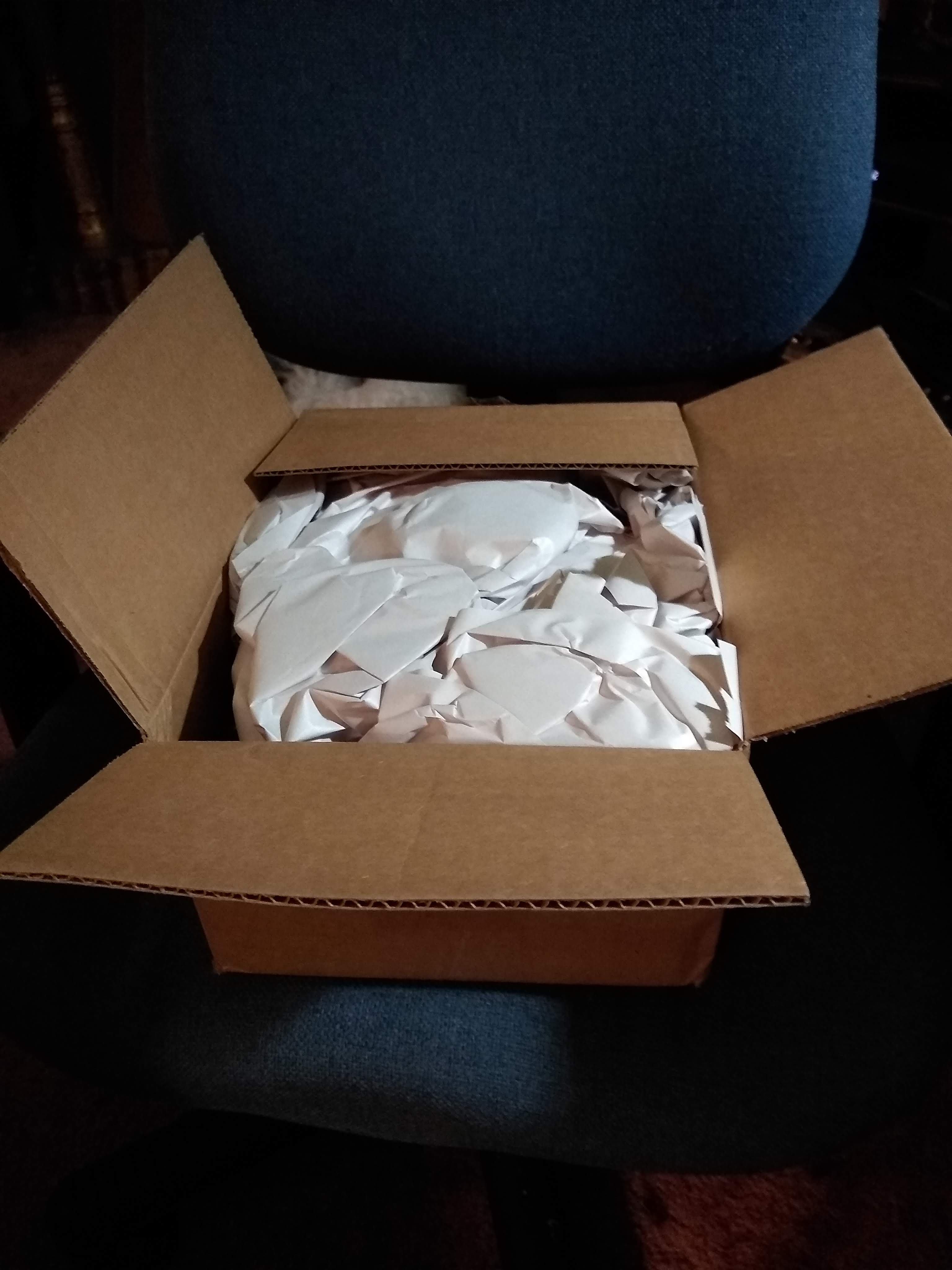 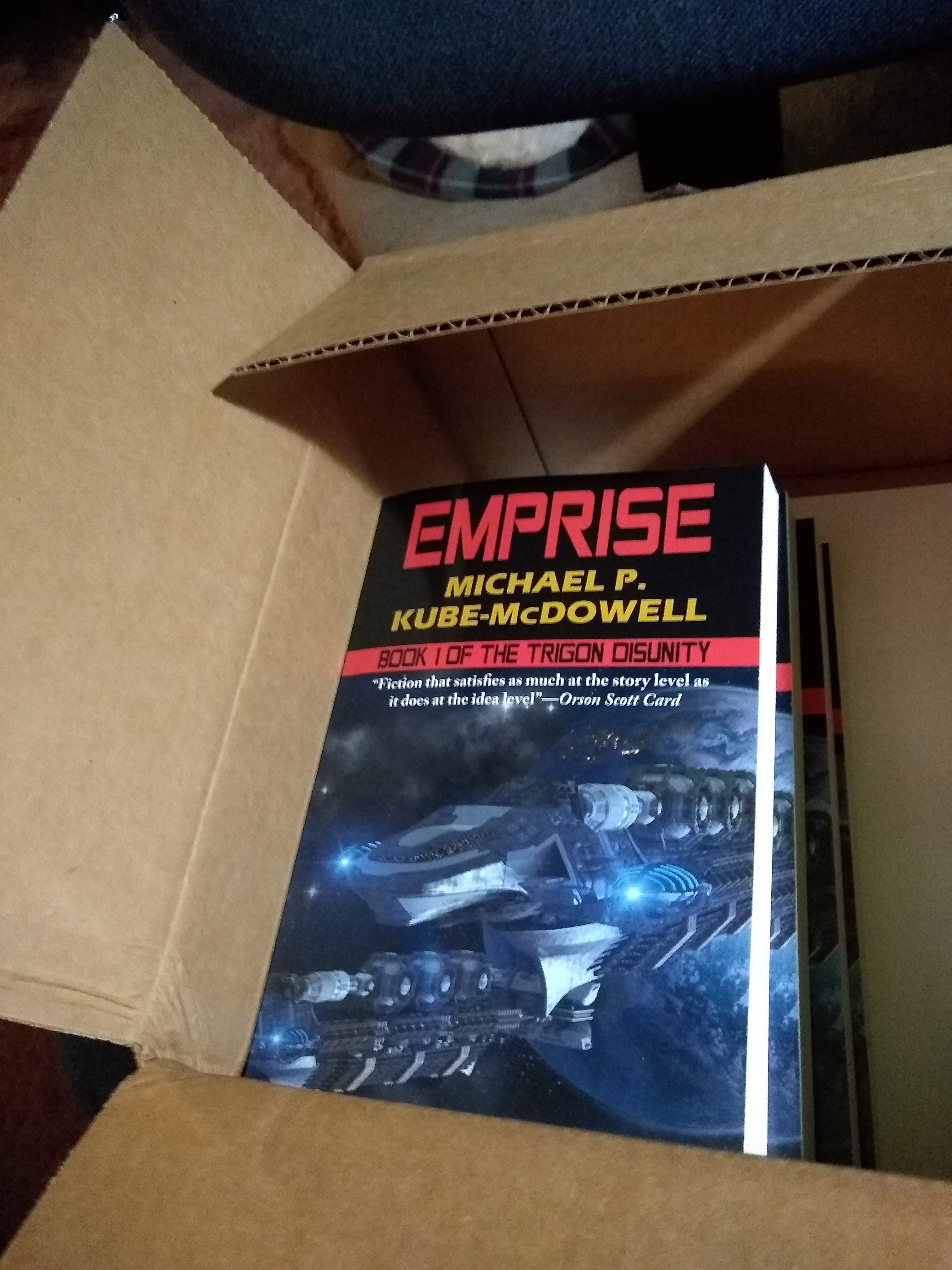 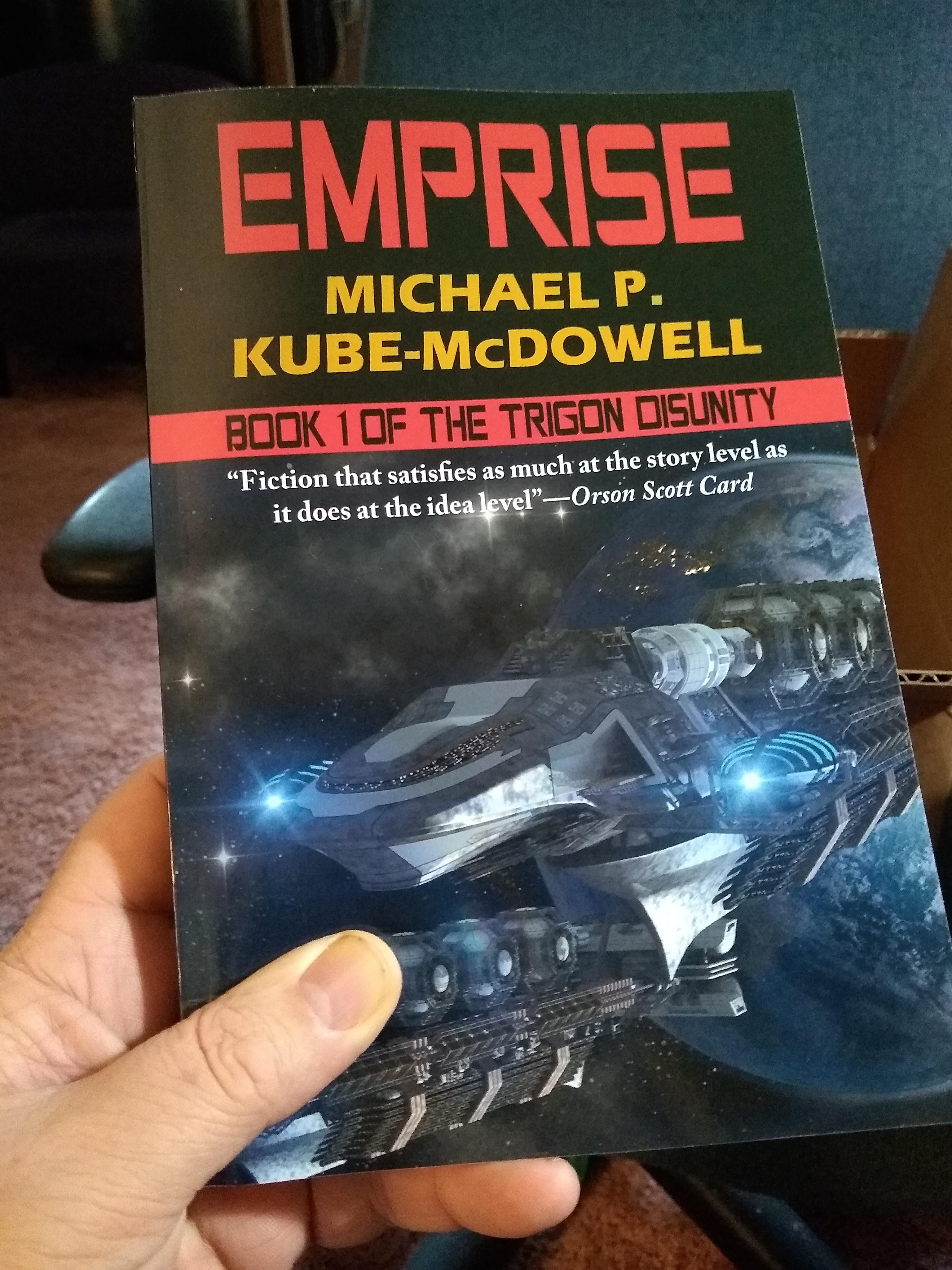 I won’t be shy about this: I’m hoping that EMPRISE and its siblings do well enough (wherever that threshold is) to open the door to the publication of something entirely new.

So I’ll be grateful to every one of you who not only rushes out and gets one of your very own, but everyone who helps in any small way to spread the word wherever your digital map extends beyond my reach. In particular, there’s no better time for friends of these books to post a review in one of the Usual Places.

I was never truly comfortable with the self-promotion side of writing, and I hate how much more weight falls on that today than it did in 1985, with making a name for yourself on social media apparently Job 1 for writers new and old. So I hope you’ll forgive me turning to old friends for an assist.

Here are the links at Amazon and Barnes & Noble.

With the kind assistance of the concom, The Black Book Band had a long overdue reunion at Marcon 54 (May 10-12). Our Saturday evening jam in the filk ballroom was our first public performance since Duckon in 2005, and our first appearance at Marcon since our concert in 1994 (at which some cuts for our First Contact album were recorded, and the band portraits taken). 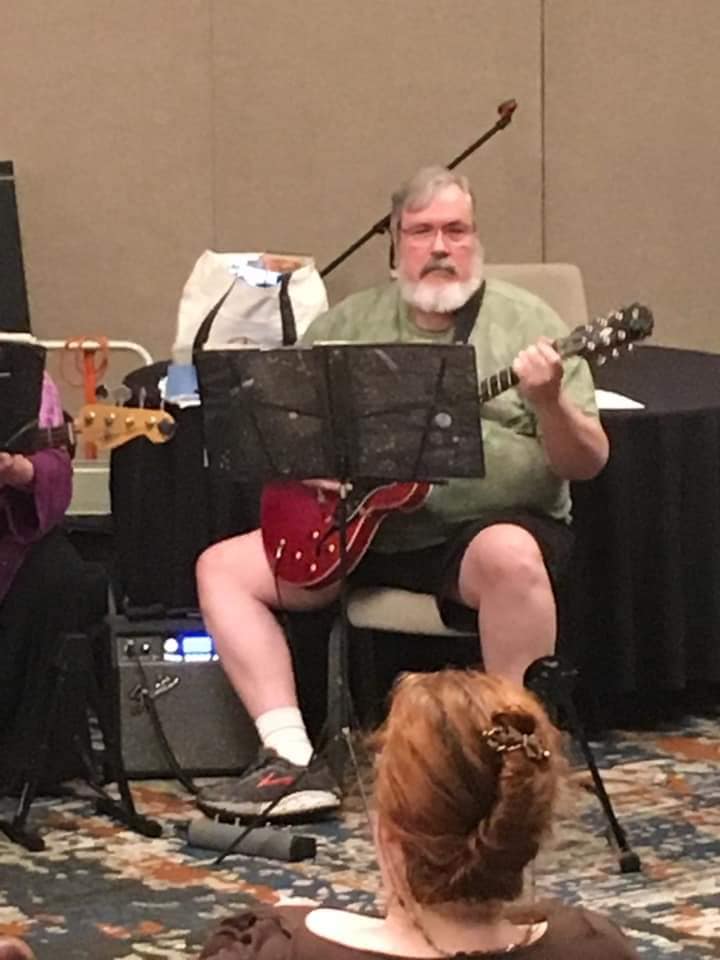 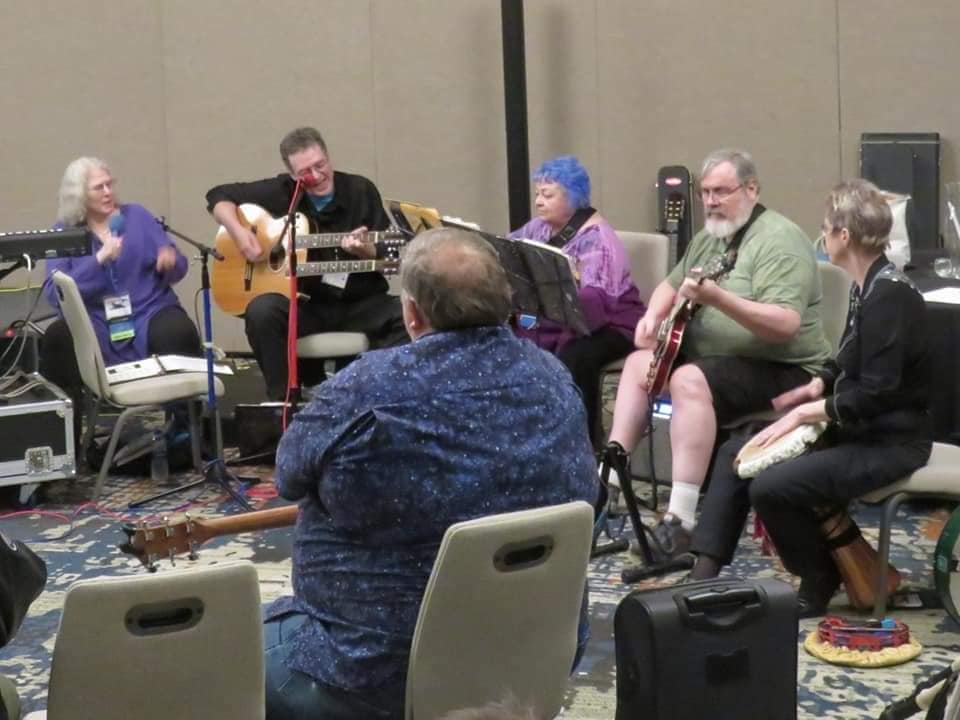 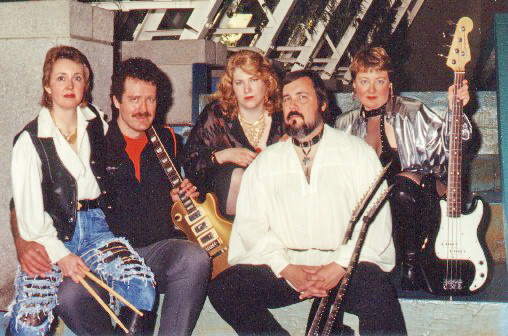 The Black Book Band at Marcon in 1994

I’m delighted to announce that on Tuesday, I signed a contract with Arc Manor to reissue six of my early Berkley/Ace novels as ebooks. The titles included are EMPRISE, EMPERY, ENIGMA, my P. K. Dick Award nominee ALTERNITIES, my Hugo Award nominee THE QUIET POOLS, and EXILE. The publication schedule isn’t locked down yet, but Fall 2019 seems likely.

If you’ve been following this profile for a while, you know that these novels have been in limbo since the death of publisher Byron Preiss and the dissolution of his iBooks imprint. Bringing them back as ebooks is a goal that I started pursuing in earnest about two years ago, and I want to thank my long-time agent and friend Russ Galen for continuing to believe in me and these works. The seas turned a little rough as we sailed on in search of a safe harbor and a new home port, but here we are at last.

Now I can focus on another promise I made to myself (and to others, even if they weren’t there to hear it)–namely, a new Kube-McDowell novel. Most of my previous novels took about a year to write; let’s see if I can’t keep that promise by this time next year.

It’s screener season again. The trend toward streamable screeners–an access code rather than a DVD–continues. Definitely fewer discs at this point than any previous year: GREEN BOOK, BOY ERASED, FIRST MAN, DEADPOOL 2, BLACKkKLANSMAN, A QUIET PLACE, BEAUTIFUL BOY, THE WIFE, CAN YOU FORGIVE ME? Invitations to free screenings on both coasts, occasionally Chicago but never closer.

Among those who are still sending out DVDs, no one is having more fun with it than Amazon. The packaging for their screeners has creative, audacious, silly, and entertaining in its own right.

The first of the Amazon shipments was preceded by three text alerts that a special handling parcel requiring a signature was en route. It arrived looking like something out of MISSION:IMPOSSIBLE, or a diplomatic pouch, with warnings that opening it meant acceptance of the mission. Inside was a disc sealed in an x-ray proofed nickel-poly bag marked with a case number and other codes, as well as a dossier-style book with a tamperproof seal. It wasn’t until you cut through the former and tore open the latter than you knew all this was for the series HOMECOMING.

A day or two later, more text alerts, another signature, and a plain white cardboard box the size (and weight) of an old BRITANNICA volume. Plain except for the address label and a large red royal crest seemingly stamped on the back. Inside, a glossy book-spine box of the sort a presentation photo album might come in, stamped in gold script: THE ROMANOFFS. On the back side of the cover, the DVDs were in a red envelope with a gold wax signet-ring seal. In the box (with a handy black ribbon to help lift them out) was the most thorough inside-baseball bound script I’ve ever seen, including plans for FX shots and color-coded pages reflecting which draft of the script was included. There were also a couple dozen glossy 8×10 production stills. Surely the most expensive screener package I’ve ever received.

The third and last of the special Amazon mailings was a jet-black tube the diameter of a DVD and almost a foot tall. It was sealed with a hot pink ribbon, and the hot pink end caps declared it for Season 2 of THE MARVELOUS MRS. MAISEL Cut the ribbon and slip off the lid, and you’re greeted by more ribbon, black this time, nearly tying up a hot pink stack of discs. The rest of the tube was occupied by a dozen or so rolled promotional posters.

Compare this to Sony Pictures Classics, which for as long as I’ve been on the list sends out its screeners in those little white envelopes with the clear window–the epitome of minimalism.

I have to admit I actively enjoyed the over-the-top Prime Video packages, which felt more like unwrapping a cleverly wrapped gift than opening the mail. I got the feeling someone (or several someones) had fun coming up with them, too.

I still haven’t watched HOMECOMING or more than the first episode of THE ROMANOFFS, though. 😏 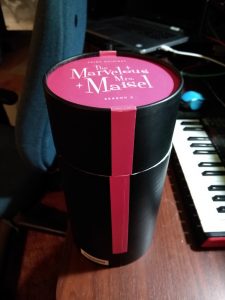 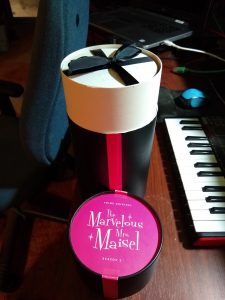 Farewell to Kate Wilhelm, who passed away Sunday. I wasn’t fortunate enough to be able to call her a friend, but I got to know her a bit through the Clarion Workshop while it was here at MSU, and I had tremendous respect for her as a writer and a teacher. I don’t know how visible Kate Wilhelm was from the hemisphere where most of fandom lives these days–I suspect she was below the horizon of too many of today’s fans–but she was a very bright star in science fiction’s firmament, and her passing leaves a hole in our sky. 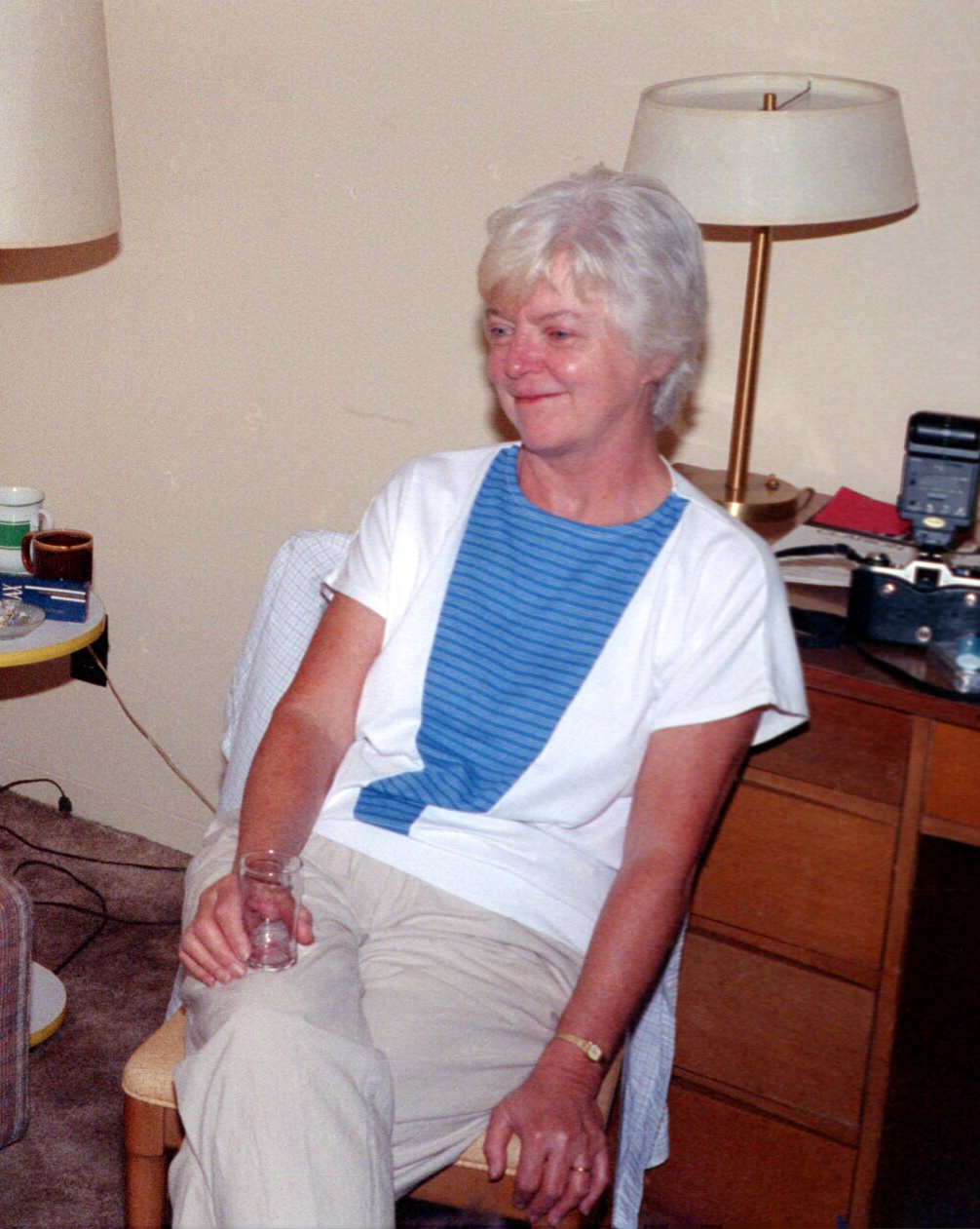 (Photo by me, July 1990, at the Clarion Workshop. I have cropped a shirtless Damon Knight out of the frame.)

Yay! Not one, but two royalty checks today. Thank you to whoever’s been buying the ebook of THE TRIGGER.