One of my regrets is that I never had an opportunity to experience a Saturn V launch in person. There were thirteen launches of the full stack from 1967 to 1973, ten with crews aboard. I was in 8th grade when the first Saturn V flew on 9-Nov-1967; I was a freshman in college (without a driver’s license, let alone a car) when Skylab was launched on 14-May-1973.

I did eventually make it to the Cape Kennedy press area for the STS-4 mission in June, 1982. That was when I got a taste of what that experience would have been like. No TV camera comes close to capturing what it’s like when four or five million pounds of machine starts a rocket-fueled journey to Earth orbit.

If the SLS Block 2 ever gets as far as a launch pad, I’m going back to Florida.

This is a NASA photo shared from their Flickr account. The vehicle is carrying Apollo 14; the photo was taken with an automated camera from one of the swampy areas near Pad 39A. 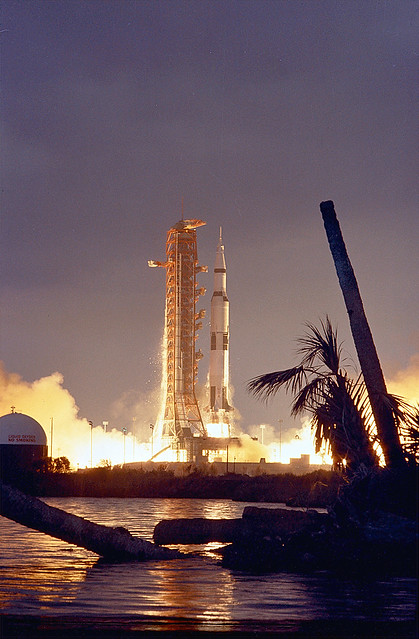